A former US Navy Seal, the critically acclaimed writer of the book Extreme Ownership, mr. Jocko Willink provides the audience with a strong statement that "discipline equals freedom". The book is worth a read, but the word discipline is something that most of the more successful people are very familiar with. Nothing good comes easy.

Discipline and productivity go often hand in hand forming together one's ability to constantly perform and improve. So why not to just go and write the tasks or goals down in a nice to-do list, and start working through it day after day, week after week and month after another?

Well I, as well as many other people and experts, have also personally tried to do just that, but often it has not only been rather ineffective, but has actually introduced much more stress and anxiety than before the fact. Why is that?

Many people have periodical stages where they look to do more progress. This writing is aimed towards a reader who is in a stage of wanting to achieve more and increase the productivity while better managing the associated stress.

When the to-do lists simply do not work anymore

To-do lists are particularly good as memory helpers for some shorter and smaller tasks to be completed within a short period of time. On the other hand they are not very good for bigger tasks, goals and objectives. The biggest problem with to-do lists is that they do not touch upon the time-related aspects in any way. Actually, the to-do lists just completely ignore the factor of time and it being a limited resource.

Second of all, the human psychology just works in such a way that is prone to overthinking and constant re-considering of the same things over and over again. Important tasks and goals, including the ones in a to-do list, keep getting re-evaluated, re-considered and juggled in one's mind, thus introducing stress, frustration and anxiety. When the stress-levels go up, it starts affecting the current tasks at hand, thus decreasing the overall focus and concentration, e.g. productivity. This is in my opinion the single worst aspect that the misuse of to-do lists can result in.

Now just imagine being a student that studies multiple different subjects at once, has to work on a challenging job during occasional evenings and additionally tries to build some new business. That requires discipline. It is a situation where a lot of active people can quickly find themselves in. I was experiencing this during my studies.

It was an outcome of a particularly strong will to learn, build and progress with my goals and ambitions. I kept building up ever so longer to-do lists in some of my personal note-taking apps. Eventually I started to feel stronger pressure regarding all of the things that I needed to accomplish and stay on top of. At times the stress was so strong that it ultimately drove me into a burnout and a period of significantly degraded well-being.

I had to find a way to make it work and stay away from losing my mind at any given moment.

Master the calendar on a weekly level

From a calendar to the weekly planning. | Photo by Jazmin Quaynor, Unsplash

A way to avoid most of the abovementioned pitfalls is to start using your calendar effectively. This may sound dubiously simple and flat-out naive, but it does work. You might think that you've already got your work and home calendars always with you and you are using them all the time, but that is not helping... Well I challenge you to take the calendar thinking to the next level. An optimal period of time to plan ahead versus the general uncertainty of life in my opinion is one calendar week.

Calendar forces you to evaluate the time aspect of your tasks and it also enables the peace of mind that the right things get done with a higher certainty. Spending one hour on Sunday evening to plan the week ahead of you pays off by saving many more hours that would be otherwise spent on re-juggling and re-evaluating various tasks many times over (thus introducing stress and decreasing your confidence).

In addition to the meetings and appointments that you have had in your calendar, start writing in the things that you previously may have not. Particularly the things that need to be done or progressed. Even better, I have personally found that a separate weekly schedule for all of your tasks and objectives works best.

Good example of things that you could start filling your timeslots with:

More on the best practices regarding building your weekly schedule further down the article under "things to note".

Why would you write such things in your next week's schedule? Because each and every week you want to probably move closer towards achieving your longer-term goals. Acquiring knowledge in a particular topic, learning a new language, finishing the university degree, taking the next step in your career, or anything else for that matter are some good examples of these.

Keeping in mind the bigger picture

Where you want to be in the next five years? What is driving you forward? What would you like to be extremely good in? What and why would you like to explore and learn something completely new? Progress and discovery makes a lot of successful people's lives worth living and keeps them motivated to keep pushing forward.

Of course no one can be eternally productive and just keep on going without having an occasional break and a good time's rest. The question remains though: How should your normal week look like for you to be one step closer to your goals?

The weekly planning process ensures that even if the rate of completed things versus the planned ones at the end of the week is only half (50%), you will most probably still feel satisfied. You will know that you are generally going in the right direction as well as towards where you want to be later down the road.

Graphic: Weekly Productivity Increased and Sustained - An iterative way towards the longer-term goals.

It is adviseable to take into account a couple of important aspects when trying to raise your overall productivity and increase the chance of success.

When planning the week ahead, it is important to take your time and concentrate for at least an hour. Start with filling in the mandatory appointments from other calendars and include the must-haves, like the lectures, visits to the dentist or working hours to state some examples. Move down your with your priorities and think about the things that need to be done, as well as who do you have to meet in order to progress your projects and tasks. At the lowest weekly priority level fill in some of the less important things like excercise, gym, dinners and others. The priorities are in part of course derived from your goals and where you want to be as has been mentioned above. After a while your schedule will start to come together nicely.

It is extremely important to have enough breathing pockets (1hr) in between your activity slots and also account for some basic uncertainties. Things constantly move around and are cancelled along the way. In the daily life it is easy to get caught up talking with your colleagues for example and there is nothing wrong with that. What counts is that with this approach you will still always know where you stand with your priorities. Often even with a relatively vague schedule, after a while you will still start feeling the overall pressure on your mind and body, so it is of major importance to adjust the balance of your schedule to be in accordance with your well-being.

Already after the first week of such an approach it is easy to get disappointed. Do not be harsh on yourself when things do not go according to the plan. It is easy to get caught up in being unhappy with how the week was due to all of the possible distractions and changes that it ended up introducing. That is ok. In fact, during the busiest of weeks I was happy enough when just half (50%) of the planned things actually happened versus not. It is difficult to ever cross even the 70% mark of actually doing the things that you had planned to do.

At the end of the week it is interesting and beneficial to follow what I tend to call the "rate of effectiveness":

After a week or two you will be able to revise and reitarate your planning and execution process, thus honing it towards better efficiency. After each week you can look back to reflect if it has brought the results that you wanted in the form of better overall control while also managing to do more and decreasing the level of stress.

In the first half of 2016 I had some very busy times on all fronts. My idea was to start incorporating this approach into my daily life as things started to feel they were about to get out of hand. I deployed my weekly planning process successfully for a period of about three months. Those ended up being some of my most productive phases to date.

Unfortunately after successfully launching one of my most ambitious learning events together with my team, things went a bit too hectic and resulted in a sort of a burnout and a worsened health condition.

Since then I have been able to recover and improve my balance, but many lessons were learned. Here are some of the remarks I wrote down after the first couple of weeks when incorporating this approach in January 2016:

Below is an example of my weekly schedule drawn with a pencil. Each week on Sunday evening I sat down to think through the oncoming week. 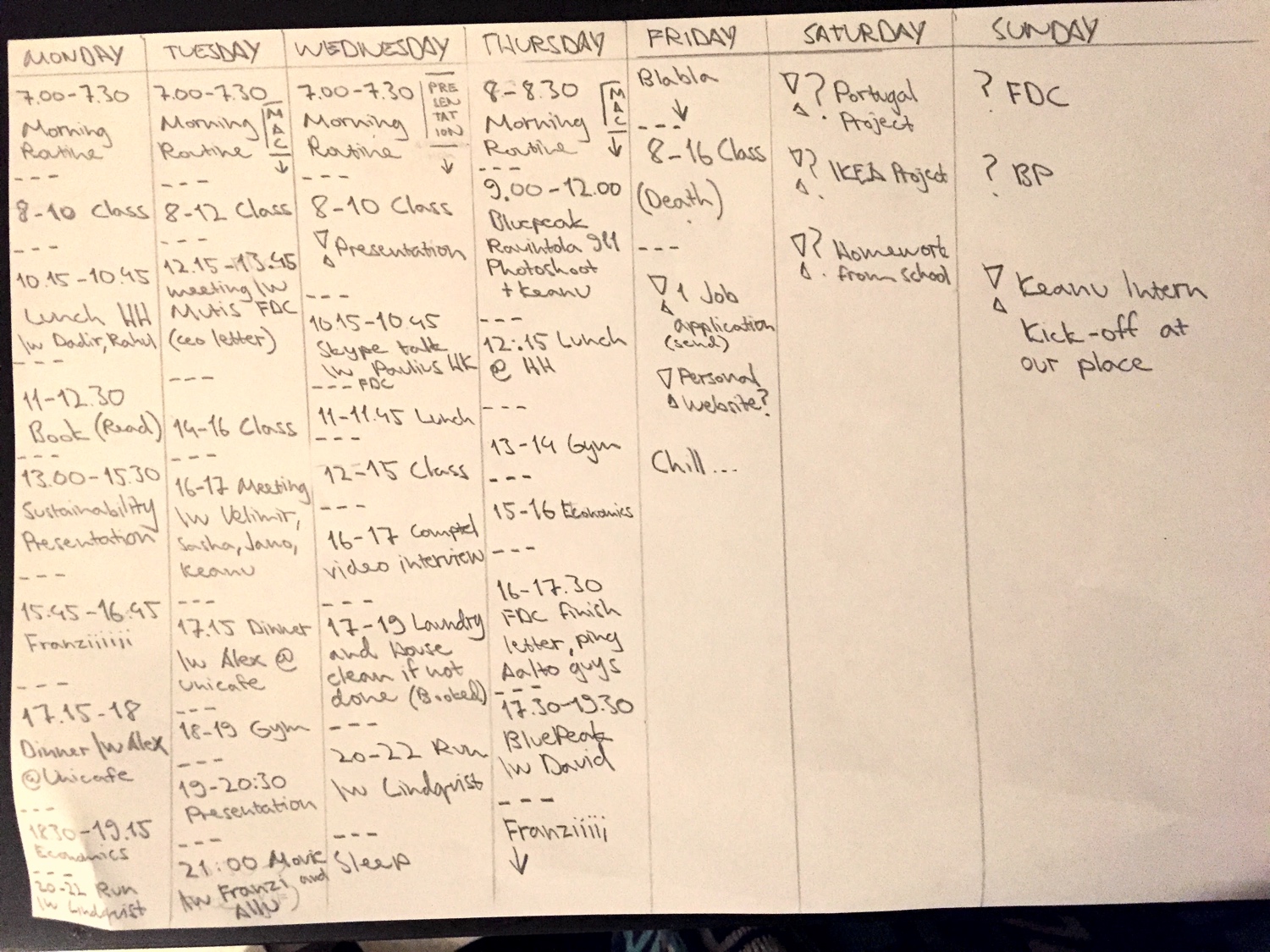 During the three months of applying this approach most effectively I felt like an unstoppable missile.

One has to feel this sort of confidence and see things getting done better and faster in order to understand that it is all about the freedom to steer yourself in the direction you want. In more ways than not I agree that discipline equals freedom...

Successful sales professional has proper visibility into buyer's decision process and should be able to control and reliably forecast time-related aspects of a complex deal. 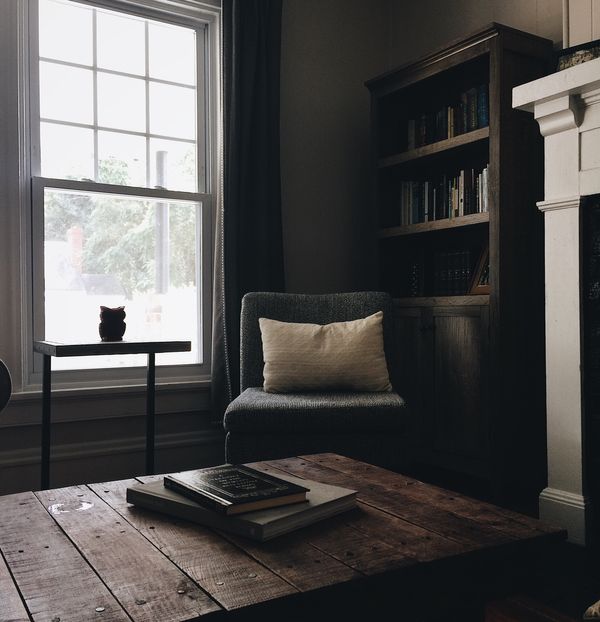 Building a solid content strategy and forming the right routine around it are some of the most important aspects when setting up a successful blog.